What Is an AR Upper?

For many first-time gun customizers, the AR-15 will be the gun of choice; it is one of the most versatile rifles you can purchase. 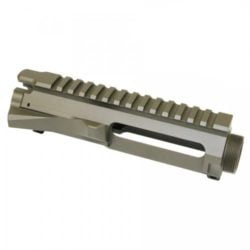 What Is an AR Upper?

Making the decision to customize your own rifle is one of the most exciting choices an athlete or hunter can make; however, the first customization project you do can also be somewhat overwhelming, especially if you don’t yet know all of the uniquely complex terminology involved. For many first-time gun customizers, the AR-15 will be the gun of choice; it is one of the most versatile rifles you can purchase. One of the most important distinctions in gun customization is the difference between uppers and lowers and understanding that difference will save you time and effort in the long run. In this blog, we’ll explore what the difference between an Ar Upper and an AR lower is, so keep reading if you have an interest in gun customization! 1. A Legal Distinction
For anyone who has bought a gun at a gun store, you might be surprised to find out that there is no paperwork involved in the purchase of an AR upper. There is a very specific reason for this fact, and the reason can be found in how the government distinguishes between replacement parts and a functional gun.

For the purposes of the safe regulation of firearms, AR-15 lowers, also known as receivers, were classified as the portion of the gun that most matters to its function. This is because the receiver is the part of a gun that connects all other parts and allows for the firearm to function. While, for some firearms, the upper is the receiver, in the AR-15 it is the lower that contributes to the function of the gun most significantly.

As a result, an AR upper is considered to be a replacement part as opposed to an actual gun in and of itself. Gun customizers can easily purchase an AR upper online or in a store without having to jump through any hoops or experience delays due to state-regulated wait times.

2. Variance in AR Parts
When buying AR parts, you will likely come across uppers that are considered “assembled” and some that are considered stripped. Assembled uppers are likely to be a good choice for those looking for a medium level of customization for their firearm. This is because assembled uppers come pre-packaged with everything you need except a lower. You’ll still be able to choose attachments and accessories, but assembled uppers can be viewed as a mostly-finished firearm, customized largely by the seller but still able to be further customized by the buyer.

Stripped uppers are the raw pieces necessary to put your own upper together in preparation for the addition of a lower. With a stripped upper, it is much easier to interchange custom components, facilitate unique attachments, and make completely personalized modifications. If you are looking to build a firearm that is 100% fit to your needs and preferences, you’ll want to go with a stripped upper.

3. Variance Between Manufacturers
Not all firearms, even of the same style, are exactly the same in construction. With that in mind, you will likely need to take the time to ensure your parts are all compatible. The best way to do this is often to simply contact the manufacturers you are considering to buy from directly.

If you think you’re ready to dig into the real research and start your journey towards a customized firearm, don’t go it alone. You can find all the parts you need at 22mods4all, along with a team of professionals who are ready to help you build the gun you’ve always wanted. Contact them today, and see just what you can make!