Uppers and Lowers: What’s the Deal With the AR Receiver?

Now, when talking about AR type rifles, there is one big difference to be noted – the receiver comes in not one, but two pieces. The reason for this goes all the way back to the creation of the M16, the rifle the civilian AR series shares a lineage with. 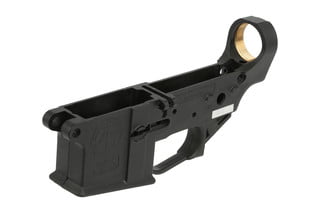 Uppers and Lowers: What’s the Deal With the AR Receiver?

For a beginner firearm enthusiast, just getting into the hobby of shooting can be confusing. There is an established lexicon among hobbyists that includes a variety of often-intimidating technical terms and jargon, some of it even having its roots in the military. In today’s market, one the most commonly misunderstood and incorrectly used sets of terms has to do with rifle receivers, and more specifically regarding the ones used to make the military M series and civilian AR series rifles. Having a quick look around the Internet on a few different retailers’ sites, one will see the terms “Ar Lowers” and “AR uppers” thrown around a lot with regards to these rifle bodies. What does that mean? How is an “upper” different from a “lower” and is that different from a “lower receiver”? Here we’ll go into some details on the origin of these terms and what you need to understand so you can know what to buy to best suit your own custom firearm build.

First off, let’s define what exactly a receiver is in the first place: basically, this is the frame of the firearm. All internal mechanisms, such as the barrel, trigger, and loading mechanisms, as well as external parts such as the sighs, rails, and safety are in one way or another contained in or attached to the receiver. This is very important to know because the receiver, under US law, is a firearm and must have a serial number. Even when stripped of all necessary firing mechanisms, this crucial part of the firearm is still considered a weapon.

Now, when talking about AR type rifles, there is one big difference to be noted – the receiver comes in not one, but two pieces. The reason for this goes all the way back to the creation of the M16, the rifle the civilian AR series shares a lineage with. The M16 was designed to be serviced on the battlefield in Vietnam, and thus the creators made the body of the rifle so that it could be disassembled by a soldier in the field without tools. Thus, the upper and lower receivers are connected by just two pins, which can be undone by hand. Now, you are likely wondering: “Well then what constitutes a firearm, in the case of a two piece receiver?” and the answer there is simply the lower. Since the trigger and related firing mechanisms are housed in the lower, this is the part containing the serial number and what must be registered as a legal firearm.

However, it is important to note that not all lowers are considered a firearm. A lower that is 80% complete, thus called an “80 lower,” is not hollowed out and is legally not considered a firearm according to the BATFE (Bureau of Alcohol, Tobacco, Firearms, and Explosives). This kind of lower does not require an FFL (Federal Firearms License) or a serial number and needs to be milled by the buyer him/herself and kept by the buyer for personal use only. It is recommended, however, that once a buyer mills the 80 lower, they should equip it with a serial number in the case it gets lost or stolen.

Hopefully this clears up some of the confusion surrounding AR series receivers. If you are looking to build yourself an AR from the ground up or replace parts on an older model, 22mods4all has what you need. Sporting the lowest prices you’ll find anywhere and a fast growing inventory, 22mods4all is proud to offer an inventory of high quality American-made products, including US AR lowers and uppers.