How we, as children, longed for the thick, fluffy, Turkish (Why Turkish?) pastel coloured towels which we occasionally saw in hotels or friends’ houses. 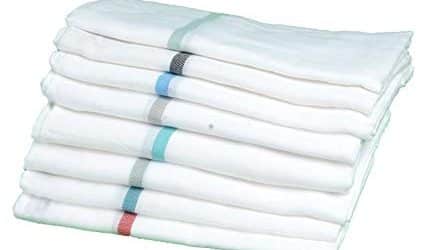 ‘Thorthu’ – that is the Tamil word for a thin towel, usually white, with a coloured line or two at either end. In some, 2 flag-like coloured strip is stitched. These, I think are for identifying each other’s ‘ thorthu’.

How we, as children, longed for the thick, fluffy, Turkish (Why Turkish?) pastel coloured towels which we occasionally saw in hotels or friends’ houses. They absorbed water well and it looked good to be wrapped in one when we came out of the bathroom. The ‘thorthu’ not only looked beggarly, it also revealed our ‘Madrasi’ identity to one and all, in a place where we were a small minority. Neighbourhood children and even some schoolmates called out ‘Anda gundu, nara gundu’ ‘swami’ and such names to make fun of us. Visitors were often directed to our house by ubiquitous ‘thorthu’ hanging on the window sill or clothesline.

Our parents were quite oblivious to our painful embarrassment. Our Appa even draped it on his shoulder when he stood at the corner chatting with some friend. Even in these times, the Shiv Sena had reared its parochial head, wanting to drive away all ‘Madrasis’ because they had taken away their employment opportunities. Now the ‘thorthu’ took on some fearful dimensions. We tried to keep it away from public gaze, as we did other tell-tale signs of our ‘Madrasi’ origins, like Amma’s ‘thali’, ‘kadambam’ in our hair, our ‘pavadai chattai’ (long skirt and blouse).

We swore to ourselves that when we started earning we would buy the Turkish towel, preferably Bombay Dyeing, and never have or use this (whose name I will not mention).

Years passed. We grew and established ourselves as proficient students which earned us respect among friends. Our friends, too, had grown up and we formed lasting bonds in which we developed a more broad and cosmopolitan outlook. The disgraceful little item faded into the background of our existence, though the resolution about the Turkish towel remained.

As we studied and appreciated different cultures through books, films and acquaintances, I noticed that throughout the length and breadth of this country, men always carried something similar to the ‘thorthu’ – like ‘gamcha’ – and women had a ‘pallu’ ‘dupatta’ or ‘odhni’. These versatile garments served several purposes – a duster, a shade against the sun, a napkin, waistbelt, turban – just anything. In a monoact which stays in my mind, the actor uses this small towel alternately draping it over his shoulder or as a ‘pallu’ over the head, depicting a husband and wife, in a 15-minute conversation. A Turkish towel could only help in Bollywood dances (remember Saira Banu, Kajol, Ranbir Kapoor?)

When we could actually afford thick Turkish towels, after the initial exuberance, we found them a pain to wash, unhygienic for reuse, difficult to pack during travel – not at all ‘paisa vasool’. By this time, we also had sufficient natural cushions on the body so even that comfy feeling was lost. Back to the humble ‘thorthu’. So utilitarian, so economical. Now even friends ask us to get the ‘Madrasi’ towel for its lightness, easy wash and dry, travel convenience and even if it is lost, no worries. Easy on the purse.

Use the ‘thorthu’. Have a clean and dry day!