The difficulties of an online friendship

The boost comes from the anonymity, no access to body language, and variety. The boost most of the time is fake, it seems real because it is real, it stays real for a short amount of time till it dies out and actually opens up. 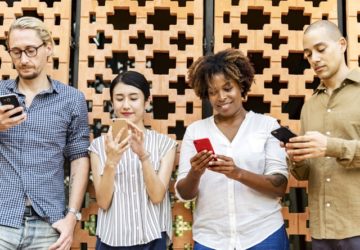 The difficulties of an online friendship

A lot of people choose to form online relationships with “randoms” on the internet.
Sometimes for when they are desperate for friends, sometimes because they fit in, and sometimes because they’re curios of the outcome, and a lot more reasons beyond me.
You meet and talk to an insane amount of people, not only because there isn’t a limited amount of people that can be in the same place you’re in but also because most people like you are devoted to actually trying it out.
MOST of the time these people are either weirdos or socially awkward nerds. MOST of the wierdos pair up with the wierdos and MOST of the nerds pair up with the nerds.
Throughout the whole spectrum of different,relatable,pretty,ugly,insane,sane people,you most of the time find the person that suits you best.
When you find the person that suits you the relationship status gets boosted almost instantly for many reasons. Most of this paragraph are reasons. So many reasons you form in your head throughout the years you’ve had friends on the internet.
The boost comes from the anonymity, no access to body language, and variety. The boost most of the time is fake, it seems real because it is real, it stays real for a short amount of time till it dies out and actually opens up.

Anonymity: A scary thing to have,with anonymity comes so much power that a kid cannot handle. Most of the time this power cannot be handled,the reasons are desperate,fitting in,outcome,all of those an adult would not be interested in most of the time.
The power of anonymity is not taken well. It can let you lie,it can let you threaten,but most of all it can let you express yourself emotionally more than you would in the real world. Most of these people do not have a satisfying life and childhood.
The difference between the online state of sharing your feelings and in real life is very simple. Online you are not embarrassed, online you are not courageous ( which you think you need ). Most of these people want to be your friend because of your positive personality points,not because of the sad shit happening to you.
Only type that would be interested in this type of telling and emotional person is the curios type,sometimes gets to interesting for them so they tap out as well. By not tapping out early you are being respectful and have a moral obligation later on when most is said to help them,that gets very time consuming and tricky most the times.

The real world you would never tell a new friend how depressed you are because of your parents not letting you have a piercing and cry in voice calls for hours,or how terrible your life is, so terrible that even with your friends helping you is not manageable.
Anonymity. You have nothing to lose.
No access to body language. This one pairs up with anonymity in some fields,a lot of real relationships are with physical contact. The internet with its insane amount of interesting things to do is surprisingly more boring than the real world. In the real world all these things are new and exciting,on the internet they just feel useless and unacheiving most of the time.
Not only do you get bored quickly with your friends,because you picked someone with only one of the same interests as you for some reason but also because it is the same person after a while after all. Nobody language means most of the time no consequences most of the time. And with no consequences comes the craziest shit you could think of.

One of the most bizarre things is actually a very interesting trait you have in your head. Once you start forming an online relationship you don’t care about what they look like and most of the time you won’t even find out what they look like. You try to tell yourself so so much that its their personality that matters and only that. But after you take a look at their face. Oh no. . .

Once you see your friends face after all this time and god forbid they are not what you wanted them to look like it is such a tragedy. It’s insane how insensitive we really are. Once you see their face your whole form of usual communication and mindset with and to them changes. Everytime you talk to them you remember their face because you remember they are behind a screen.
It becomes so interesting to you how their voice didn’t fit their face all this time,it becomes so interesting to you how they are so pretty or ugly. You become so obsessed with that little part of your friendship that it flips the whole thing around.
Body language is what shuts up the unknown part of your mind.

Variety: Variety is the most important factor in an online friendship. You mainly start off by doing something with your friend that interests you both the most. Once that thing is in none of your interests anymore,you would naturally start looking for something that would interest you both again but in this case because it is online and the relationship in the deep part of your feelings is not considered important you ditch that idea.
You stop messaging each other and you stop talking. Most of the time this leads to both parties rinse and repeating with other throw away friends. In the other case of you both enjoy doing multiple things together and actually would sacrifice some interest to please and spend time with the other party it goes better,but not well.
It gets to the point of not being bored with the activity you are doing,but each other. You spend so much time with the other partner and cannot take it to the next level because most of the things next level are real life activities. It comes to the point that if the couple don’t spend a lot more time during the day than normal new friends would spend, both parties get disappointed and bummed out.

You grow up and cannot keep up with them because you both get busy and making plans by trying to figure out which time you both would be free is very hard because this is online,and anonymity + no body language.

Most people have multiple friends online,they can pick the best ( most enjoyable ) and hang out with them instead of you. All this leads right to the 3 points. Oh and sometimes manipulation and drama. But hey thats childish 🙂