What is this face, less clear and clearer
The pulse in the arm, less strong and stronger-
Given or lent? more distant than stars and nearer than the eye
Whispers and small laughter between leaves and hurrying feet
Under sleep. where all the waters meet.
Bowsprit cracked with ice and paint cracked with heat.

He was awarded the Nobel Prize in Literature in 1948, “for his outstanding, pioneer contribution to present-day poetry”. 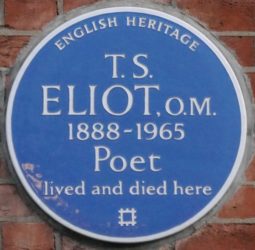 Morning at the Window

They are rattling breakfast plates in basement kitchens,

And along the trampled edges of the street

I am aware of the damp souls of housemaids

The brown waves of fog toss up to me

Twisted faces from the bottom of the street,

And tear from a passer-by with muddy skirts

An aimless smile that hovers in the air

And vanishes along the level of the roofs.

A penny for the Old Guy

We are the hollow men

We are the stuffed men

Our dried voices, when

Are quiet and meaningless

As Wind in dry grass

Or rats’ feet over broken glass

In our dry cellar

Shape without form, shade without colour,

Those who have crossed

With direct eyes, to death’s other Kingdom

Violent souls, but only

As the hollow men

Eyes I dare not meet in dreams

These do not appear:

There, the eyes are

Sunlight on a broken column

There, IS a tree swinging

In the Wind’s singing

Than a fading star.

Let me be no nearer

Behaving as the wind behaves

Not that final meeting

In the twilight kingdom

This is the dead land

This IS cactus land

Are raised, here they receive

The supplication of a dead man’s hand

Under the twinkle of a fading star.

In death’s other kingdom

At the hour when we are

Lips that would kiss

The eyes are not here

There are no eyes here

In this valley of dying stars

This broken jaw of our lost kingdoms

In this last of meeting places

Gathered on this beach of the tumid river

As the perpetual star

Here we go round the prickly pear

Here we go round the prickly pear

At five o’clock in the morning.

For Thine is the Kingdom

For Thine is the Kingdom

For Time is the

Not with a bang but a whimper.

Journey of the Magi

‘A cold coming we had of it,

Just the worst time of the year

For a journey, and such a long journey:

The ways deep and the weather sharp,

The very dead of winter.’

And the camels galled, sore-footed, refractory,

Lying down in the melting snow.

There were times we regretted

The summer palaces on slopes, the terraces,

And the Silken girls bringing sherbet.

Then the camel men cursing and grumbling

And running away, and wanting their liquor and women,

And the night-fires going out, and the lack of shelters,

And the cities hostile and the towns unfriendly

And the villages dirty and charging high prices:

A hard time we had of it.

At the end we preferred to travel all night,

With the voices singing in our ears, saying

That this was all folly.

Then at dawn we came down to a temperate valley,

Wet, below the snow line, smelling of vegetation,

With a running stream and a water-mill beating the darkness,

And three trees on the low sky.

And an old white horse galloped away in the meadow.

Six hands at an open door dicing for pieces of silver,

And feet kicking the empty wine-skins.

But there was no information, and so we continued

And arrived at evening, not a moment too soon

Finding the place; it was (you may say) satisfactory.

All this was a long time ago, I remember.

And I would do it again, but set down

This: were we led all that way for

Birth or Death? There was a Birth, certainly,

We had evidence and no doubt. I had seen birth and death,

But had thought they were different, this Birth was

Hard and bitter agony for us, like death, our death.

We returned to our places, these Kingdoms,

But no longer at ease here, in the old dispensation,

With an alien people clutching their gods.

I should be glad of another death.

‘Issues from the hand of God, the simple sour

To a flat world of changing lights and noise,

To light, dark, dry or damp, chilly or warn,

Moving between the legs of tables and of chairs,

Rising or falling, grasping at kisses and toys,

Retreating to the comer of arm and knee,

Eager to be reassured, taking pleasure

In the fragrant brilliance of the Christmas tree,

Pleasure in the wind, the sunlight and the sea;

Studies the sunlit pattern on the floor

And running stags around a silver tray;

Confounds the actual and the fanciful,

What the fairies do and what the servants say.

The heavy burden of the growing soul

With the imperatives of ‘is and seems’

And may and may not, desire and control.

The pam of living and the drug of dreams

Curl up the small soul in the window seat

Behind the Encyclopaedia Britannica.

Issues from the hand of time the simple soul

Unable to fare forward or retreat,

Denying the importunity of the blood,

Shadow of its own shadows, spectre in its own gloom,

Living first in the silence after the viaticum.

Pray for Guiterriez, avid of speed and power,

For Boudin, blown to pieces,

For this one who made a great fortune,

And that one who went his own way.

Pray for Floret, by the boarhound slain between the yew trees,

Pray for us now and at the hour of our birth.

Eyes that last I saw in tears

Eyes that last I saw in tears

I see the eyes but not the tears

This is my affliction

This is my affliction

Eyes I shall not see again

Eyes I shall not see unless

At the door of death’s other kingdom

Where, as in this.

The eyes outlast a little while

A little while outlast the tears

And hold us in derision.

The wind sprang up at four o’clock

The wind sprang up at four o’clock

The wind sprang up and broke the bells

Swinging between life and death

The waking echo of confusing strife

Is It a dream or something else

When the surface of the blackened river

Is a face that sweats with tears?

I saw across the blackened river

Here, across death’s other river

The Tartar horsemen shake their spears.

Lines for an Old Man

The tiger in the tiger-pit

Is not more irritable than I.

The whipping tail is not more still

Than when I smell the enemy

Writhing in the essential blood

Or dangling from the friendly tree.

When I lay bare the tooth of wit

The hissing over the arched tongue

Is more affectionate than hate,

More bitter than the love of youth,

And inaccessible by the young.

Reflected from my golden eye

The dullard knows that he is mad.

Tell me if I am not glad!

Rhapsody on a Windy Night

Twelve o’clock.
Along the reaches of the street
Held in a lunar synthesis,
Whispering lunar incantations
Dissolve the floors of memory
And all its clear relations,
Its divisions and precisions.
Every street lamp that I pass
Beats like a fatalistic drum,
And through the spaces of the dark
Midnight shakes the memory
As a madman shakes a dead geranium.

The memory throws up high and dry
A crowd of twisted things;
A twisted branch upon the beach
Eaten smooth, and polished
As if the world gave up
The secret of its skeleton,

Stiff and white.
A broken spring in a factory yard,
Rust that clings to the form that the strength has left
Hard and curled and ready to snap.

Half-past two,
The street-lamp said,
‘Remark the cat which flattens itself in the gutter,
Slips out its tongue
And devours a morsel of rancid butter’
So the hand of the child, automatic,
Slipped out and pocketed a toy that was running along the quay.
I could see nothing behllld that chlld’s eye.
I have seen eyes in the street
Trying to peer through lighted shutters,
And a crab one afternoon in a pool,
An old crab with barnacles on his back,
Gripped the end of a stick which I held him.

Half-past three,
The lamp sputtered,
The lamp muttered in the dark.
The lamp hummed:
‘Regard the moon,
La lune ne garde aucune rancune,
She winks a feeble eye,
She smiles into corners.
She smooths the hair of the grass.
The moon has lost her memory.
A washed-out smallpox cracks her face,
Her hand twists a paper rose,
That smells of dust and eau de Cologne,
She is alone
With all the old nocturnal smells
That cross and cross across her brain.’
The reminiscence comes
Of sunless dry geramums
And dust in crevices,
Smells of chestnuts in the streets,
And female smells in shuttered rooms,
And Cigarettes in corridors
And cocktail smells in bars.

The lamp said,
‘Four o’clock,
Here is the number on the door.
Memory!
You have the key,
The little lamp spreads a ring on the stair.
Mount.
The bed is open, the tooth-brush hangs on the wall,
Put your shoes at the door, sleep, prepare for life.’

The last twist of the knife. Thomas Stearns Eliot, OM(The Order of Merit (French: Ordre du Mérite)) (26 September 1888 – 4 January 1965) was a British essayist, publisher, playwright, literary and social critic, and “one of the twentieth century’s major poets”. He moved from his native United States to England in 1914 at the age of 25, settling, working, and marrying there. He eventually became a British subject in 1927 at the age of 39, renouncing his American citizenship.

He was awarded the Nobel Prize in Literature in 1948, “for his outstanding, pioneer contribution to present-day poetry”.