The Paris agreement was implemented as a collective global response to climate change,with a noble aim to reduce emissions. 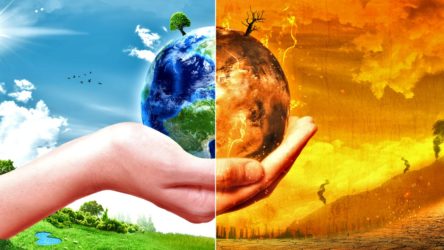 The Paris agreement was implemented as a collective global response to climate change,with a noble aim to reduce emissions.President Trump later decided to pull the US out of the agreement,describing climate change ‘a Chinese plot’ to hamper American economy.While a group of refusers still insist that climate change doesn’t exist,climate change is already here ,and It’s only going to get worse,with some of the severe effects having already started to take hold.

The year 2016 was the hottest year on record since 1880-and the third year in a row to set a new record for global average surface temperatures-according to NASA and National Oceanic and Atmosphere Administration(NOAA), with average temperatures measuring almost one degree Celsius warmer than the mid-20th century mean.A massive 97% of the researchers believe that global warming is happening and that the trends observed over the last century are probably due to human activity.

Arctic sea ice coverage has shrunk every decade since 1979 by 3.5 to 4.1 percent.Glaciers have also been in retreat almost everywhere in the world,including major mountain ranges like Alps,Himalayas and Rockies.In 2017,arctic sea ice reached a record low for the third straight running,according to scientists from the National Snow and Ice Data Center (NSID) and NASA.Sea levels rise primarily by the added water from melting ice sheets and glaciers,as well as the expansion of sea water as it warms.Levels are currently rising at their fastest rate for more than 2,000 years and the current rate of change is 3.4mm a year.In July 2017,a massive crack in the Larson C ice shelf finally gave way sending a 5,800 square km section of ice into the ocean.

Displacement of people as a direct result of global warming is not hypothetical;it’s already happening.On average,21.5 million people have been forcibly displaced since 2008 due to climate change-related weather hazards,according to the United Nations High Commissioner for Refugees.The UNHCR further says that climate change also acts as a ‘threat multiplier’in areas of ongoing conflict.

World is galloping headlong into an emergency that it can do nothing to stop and very little to mitigate-climate change.Brutally put,world stands to see famine and starvation because rising temperatures pose a serious threat to sustainable food security and there is a likelihood that unless changes can be effected then food consumption needs are not going to be met.There is no point in beating about the bush or being over positive about the ongoing situation.If temperatures continue to rise as they have;and there is no indication that the Paris Climate Accords are going to be able to apply the brakes in time to stop millions,many millions,hitting the wall with their feet hard down on the accelerator.

This is not alarmism for the sake of a headline;this is what going to happen a generation hence.The Asian Development Bank in a new report says that a ‘business as usual approach’ is going to be disastrous for all the Asian countries.It is not wrong.Just how many wake-up calls we need?